The April 2011 Issue of Cooking Light included a seemingly simple side dish using a type of mushroom I have yet to work with: Smoky Asparagus and Mushroom Sauté. Morels are a wild mushroom; efforts to cultivate this mushroom have been mostly unsuccessful. Because they need to be “hunted” (those that collect morels are called mushroom hunters, I kid you not), they are surprisingly expensive– the market I went to was selling them for $69.99/lb., ouch. So this recipe can get pricey fast. I substituted in some hen of the woods (“Maitake”) mushrooms to save my wallet a bit. I ended up spending about $4 on the morels and a $1 and some change on the hen of the woods.

I had some left over asparagus from making the Orzo Risotto with Buttery Shrimp dish a few days ago so this dish was perfect to use ingredients I mostly had on hand. 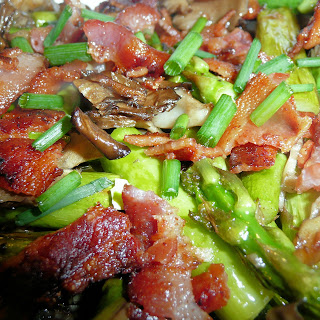 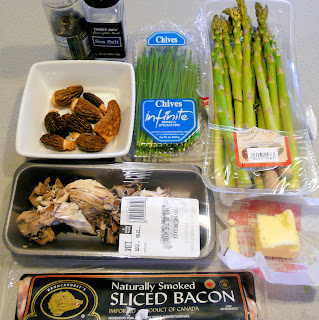 The shape of morels allows it to hide some grit within the mushroom so submerge the morels in cold water, swish to remove the dirt, and gently pat dry before cooking.

Cook the bacon in a large saute pan over medium heat until crisp. 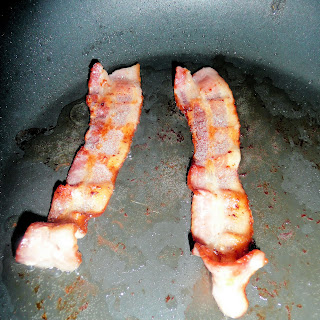 Remove bacon from pan and crumble. 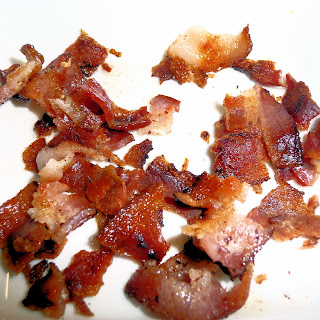 Add the butter to the drippings in the pan and swirl to coat. (So at this point, you’re supposed to add the mushrooms and cook for 4 minutes. I must have gotten antsy and jumped ahead to asparagus. Whoops.) Add the asparagus pieces and saute for 5 minutes. 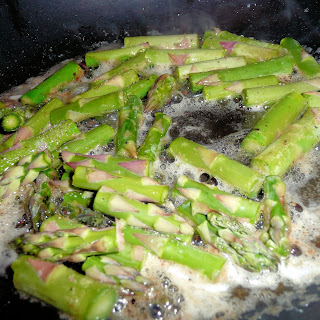 Add the mushrooms, salt and pepper and cook for 4 minutes stirring occasionally. 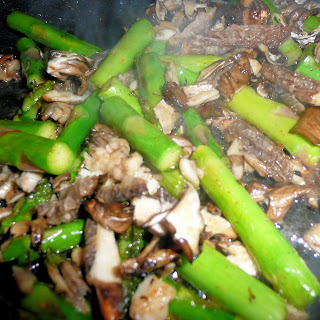 Remove from heat. Sprinkle with bacon and chives. 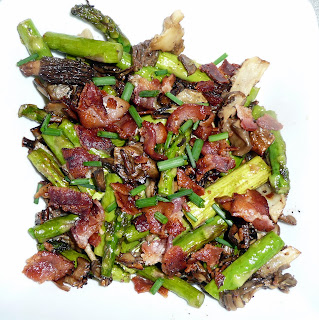 This was delicious! The bacon and mushrooms both gave a nice meaty flavor to the asparagus. I think it was a mistake to not go out and get smoked applewood bacon. I think the smokiness would have been a nice touch. Maybe next time…